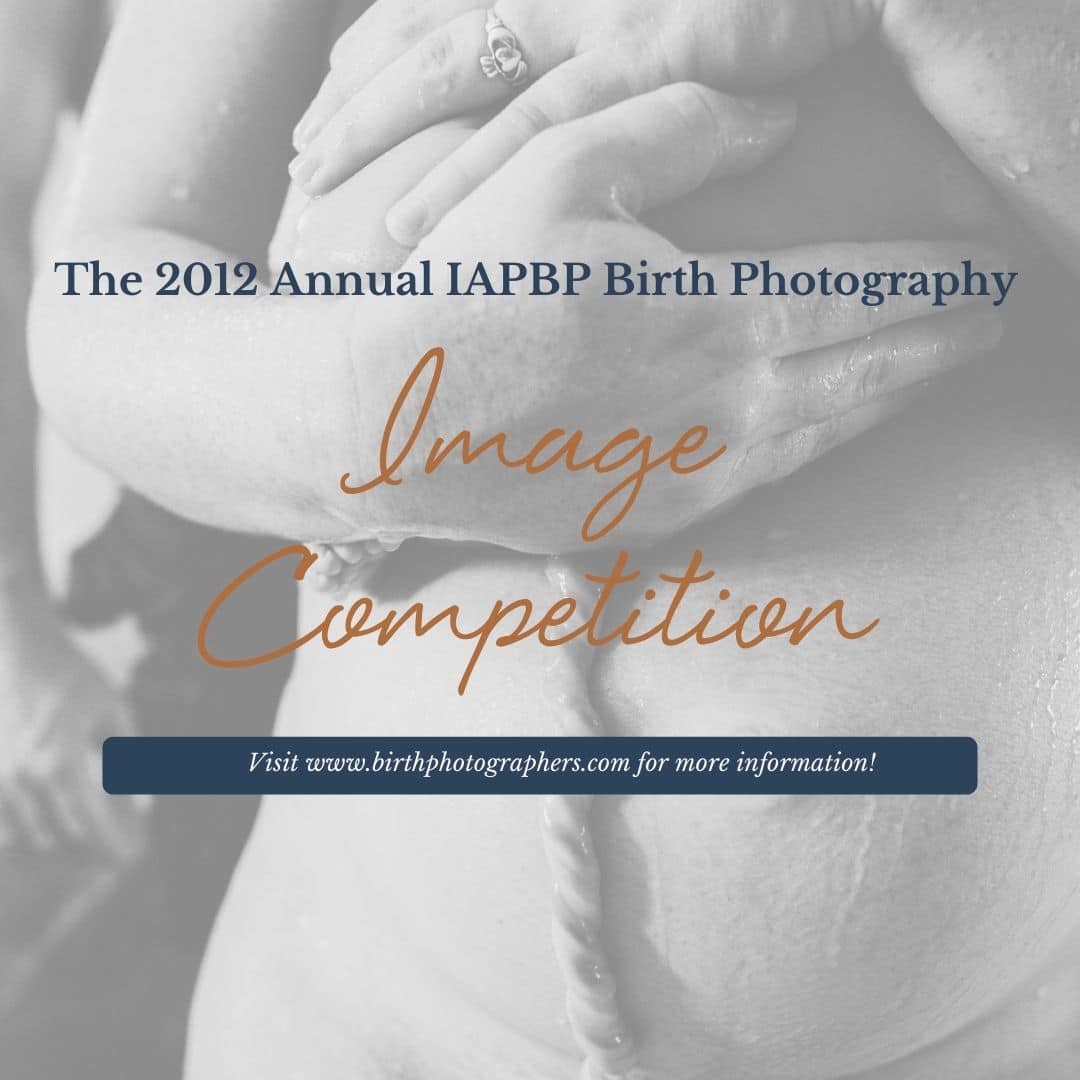 We are pleased to announce and launch the 2012 International Association of Professional Birth Photographers Image of the Year Competition.  Each year, IAPBP recognizes excellence in birth photography.  We hope you will join us in sharing beautiful images of birth with our members, our Judges, our friends, family, fans, and ultimately, the world.

You must be a current member of the International Association of Professional Birth Photographers.  If you are not a member, and would like to join, you can do so here.

Winners will be announced on:  ****insert date and time here****

If for any reason the competition is not capable of running as planned, The International Association of Professional Birth Photographers reserves the right, at its sole discretion, to disqualify any individual(s) who tamper with the entry process, and/or to cancel, terminate, modify, or suspend the competition. If The International Association of Professional Birth Photographers elects to cancel or terminate the competition, we will not retain any rights in the submitted photographs.  This contest is void where prohibited.  By entering, entrants also agree to be bound by these Official Rules; that the decisions of the Judges are final and binding with respect to all matters relating to the competition; and if the entrant wins that Sponsor may use the winning photographs and each winner’s name, photograph, likeness, and/or voice in any publicity or advertising relating to the Contest or future promotions without compensation or approval (except where prohibited by law).  The International Association of Professional Birth Photographers reserves the right to verify the validity and originality of any entry and/or entrant and to disqualify any entrant who submits an entry that is not in accordance with these official rules or who tampers with the entry process.

Jacqueline Tobin is the Editor-in-Chief of Rangefinder. Previously, she was the executive editor of Rangefinder, and before that she worked at Photo District News for 26 years, as managing and then deputy editor. She is the author of two books: Wedding Photography Unveiled: Inspiration and Insight From 20 Top Photographers (Amphoto Books, 2009); and The Luminous Portrait (Amphoto Books, 2012), on photographer Elizabeth Messina’s photography. Jacqueline loves reviewing photographers work at portfolio reviews during The Palm Springs Photo Festival at PhotoPlus Expo in Manhattan each year, as well as at WPPI Las Vegas, and various WPPI road shows and University events throughout the year. She currently lives in New York City, loves to spoil her 5 nieces and nephews, is a huge movie buff, and fell in love with making photographs and processing black-and white film in her dad’s darkroom when she was a kid.

Hailing from the beautiful state of Wyoming, Michelle Kane is the developer of photo editing tools for photographers. Her robust Photoshop actions are editing staples for thousands of photographers around the world. Michelle has been featured in various photography publications, as well as served as a contributor to a number of online photography sites. She occasionally photographs clients and models, but spends most of her time blogging free editing tutorials, articles, and how-to videos. She enjoys sharing her photography and editing knowledge with others and strives to be a blessing to others through her work.

Peggy O’Mara founded Mothering.com in 1995. She was the editor and publisher of Mothering Magazine from 1980 to 2011. The author of Having a Baby Naturally; Natural Family Living; The Way Back Home; and A Quiet Place, Peggy has lectured and conducted workshops at Omega Institute, Esalen, La Leche League International, and Bioneers. She is the mother of four.

Angie Arthur, along with Amy Lucurto, are the founders of I Heart Faces. As moms, their photography journey began by being centered around their children… and the wonderful emotions that their faces convey. In late 2008, they realized there was no website focused on sharing photos of beautiful and unique faces. That’s when the idea for I Heart Faces was born!

Amy & Angie are passionate about teaching and inspiring women to be creative and follow their dreams. See Angie and Amy on My Craft Channel this fall as they host their very own show with tips and tricks about photography!

Jan Tritten is the founder, mother and editor-in-chief of Midwifery Today magazine and a midwife who was in active practice from 1977–1989. She became a midwife in 1977 after the powerful home birth of one of her daughters. Her mission is to make loving midwifery care the norm for birthing women and their babies throughout the world. She does this by organizing Midwifery Today conferences around world as well as publishing the magazine.  One of her favorite tasks is to look at photos of mothers and babies and births so she is honored to participate in this competition.

Jennifer block is a journalist frequently covering women’s health and reproductive justice. She is the author of Pushed: The Painful Truth About Childbirth and Modern Maternity Care, which was named a “Best of” by Kirkus Reviews.

Since the birth of her first child in 2006, Lynn has completed doula trainings with DONA International, Yoga Birth Method and Hypnobabies, and is a certified yoga instructor through Core Power Yoga, in addition to completing over 100 hours of additional prenatal specific yoga instructor training.  She has also been working with Ricki Lake and Abby Epstein –  documentary film makers of the landmark “The Business of Being Born” and “More Business of Being Born” in the role of Marketing Director/Website Administrator since 2010.  Currently, Lynn is studying to be a Certified Nurse Midwife.

Laura is a nationally published photographer in Phoenix, Arizona known for her modern, fresh and colorful approach to photography. Her work has appeared in such publications as Professional Photographer Magazine, BabyTalk magazine, Celebrate Magazine and on HGTV.com, among others. Laura is honored to have been a featured photographer in ads for MpixPro. She travels often for sessions and will be visiting many major cities throughout the U.S. in 2013 for sessions in addition to offering workshops in Phoenix.

Jill Krause is the voice behind BabyRabies.com, where she chronicles life after baby fever became baby rabies, leaving her with no choice but to become a mom. She’s now mother to two, and has another on the way. Jill tries to write candidly, with a sense of humor about life as a mom. She also likes to focus on photography, and using it to document and share all the small and ordinary details of family life she knows she’ll miss the most 20 years from now. You can find her on Facebook, Twitter, Instagram and Pinterest too.

Kevin was awarded the Monte Zucker Humanitarian Award, presented to photographers who are significantly involved in their community and various charitable endeavors. Specifically cited for this award was Kevin’s creation of Bend, Oregon’s Family Photo Day in the Park in 2000. This annual event serves hundreds of disadvantaged local families via social service agencies. He has also helped other photographers launch the same type of event in their communities.

Kevin has been featured in American Photo magazine as one of the “Top 10 Wedding Photographers in the World”. He is listed as a Nikon Legend Behind the Lens, and for 2013 he is recognized as one of the Most Influential People by Shutter Magazine.

More information on Kevin Kubota and his companies can be found online at:

Matthew Rogalski, MD is an OB-Gyn in Cumberland, Rhode Island.   He received a B.S. in Biology and French at the University of Connecticut, followed by medical school at Wake Forest University in Winston-Salem, NC.  After medical school, having decided to specialize in Obstetrics and Gynecology, he did his residency at Hahnemann Hospital in Philadelphia, PA.  He now practices general Obstetrics and Gynecology in Northern RI where he lives with his wife, Amy, and their two children, Nolan and Layne.

Tara is entirely self-taught on Canon equipment and has been photographing the big and little people in her life for the last thirteen years. She strives to document everyone who hires her in an honest, artful way. Tara lives in southern California as close to the beach as she can afford with her husband, four children, lots of music, and a backyard full of succulents.

Sunday Tortelli serves as President Elect for DONA International, the most respected doula training and certifying organization in the world. She lives in the Cleveland, Ohio area where she offers her services as childbirth educator, birth doula, birth doula trainer and lactation counselor. Visit DONA International’s web site at www.DONA.org and join us on Facebook at https://www.facebook.com/home.php#!/DONAInternational.

Keren lives just outside of Seattle and has been married for almost 9 years with 2 wonderful children and one more due this March! She started photographing births almost 3 years ago and has been a part of nearly 40 births now. She has always been a “birth junkie” and loves the adrenaline rush that comes every time she gets “the call”. It wasn’t until she was invited to shoot a friends birth, that it clicked, this is what she wanted to do. It was a perfect mix of her combined loves, birth and photography. Keren averages 2-3 births a month and is a natural light photographer. She won the Birthphotographers.com “photo of the year” contest for 2011 and since then, has gotten the opportunity to talk about birth photography all over including the NY Times, on CBS’s “Right This Minute”, and even gets to have some of her photos published in an upcoming book! She hopes the popularity continues and we will all continue to help couples tell their birth story in a beautiful way.

Lyndsay is the founder of the International Association of Professional Birth Photographers.  In addition to a thriving portrait and birth photography business, Life in Motion Photography, Lyndsay mentors birth photographers from around the world through her mentoring program, The Birth Experience.  Lyndsay’s award winning portrait work has been featured in many publications through the years and she’s done interviews with Yahoo News, the New York Times, Parenting Magazine and various media news outlets around the world featuring birth photography.  She resides in Austin, Texas with her husband and four children.